Years ago, I was in a conversation with a bride at whose wedding I was going to officiate, who was planning a big  outdoor reception in the back yard of a historical property...there were to be elegant tables, seating ten people each, and there were thirty five of those tables.

They were not allowed to set up tents outdoors, and so when the bride was asked, "what will you do in case of rain?" she said, well, "we'll have to cram 350 guests into a space meant for 150, and they'll eat off their laps, and we'll make the best of it."

But this bride was praying - and I mean praying - for good weather.

Now I'm not preaching this Sunday - long ago we arranged for The Rev. Gideon Pollach, Head Chaplain at Episcopal High School, whom you will find to be a delight! - to be a guest preacher and teacher of Adult Forum.  But some thoughts have come together this week that I'd like to share here.

The first is the Old Testament lesson appointed for this Sunday where Abram (later to be called Abraham) is told to leave his family, his society, his home.

On the one hand, he is given rather vague directions: to go. But go where? He's not told. He's simply told to go to "the land I will show you." On the other hand, he is given a huge promise: "I will make of you a great nation, and I will bless you...and you will be a blessing."

What is Abram's response? "Abram went, as the Lord had told him."

In the weeks before this bride's wedding, at one of our pre-marriage counseling meetings, the bride said something to me about  prayer.

She said, "John, I know you aren't supposed to bargain with God, but my prayer has been, 'God, if you make it a nice day, I will never complain about anything.'"

(I think the prospect of that coming true got her fiancée praying as well!)

So the day came, and it was a beautiful day. And she kept her word: even though the caterer messed up several things (including bringing her some other couple's cake!) she really did smile through the whole thing, saying, "it's okay, it's not a problem."

She had a peace about her, "the peace that passes all understanding."

Why? Is it because her prayer was answered? Well yes, at one level, sure.

But let me tell you how her prayer was answered...this young lady also told me that while at first she was praying for good weather, she found that over time, she was also praying, "and God, if it is a rainy day, please give me the patience to deal with it."

If we pray persistently enough, honestly enough, and often enough, God will pour his holy spirit into our hearts.

And - a little like that bride - we will find our prayers changing..."I want a pretty day, but if it isn't, give me patience."

You see? By the time her wedding day came around, she'd made peace - she still wanted good weather but she realized on a deeper level what was more important was the weather she was going to carry with her, no matter the weather outside.
She'd prayed enough that she let go to some degree her need for good weather, even if it was still her desire.

Often when we pray we aren't really praying, but just telling God what we want and asking him to rubber stamp it.

But if we pray often enough, and honestly enough, and persistently enough, God will change our desires. Re-arrange our priorities. "Cleanse our hearts by the inspiration of God's Holy Spirit." Shift our worldview.

It's no coincidence that those thoughts on prayer are on my mind in light of this Monday's decision by the United States Supreme Court that - by not granting an appeal - let stand the unanimous ruling of the Virginia Supreme Court that returned, in 2012, The Falls Church Episcopal Church property to The Falls Church Episcopal and the Diocese of Virginia. 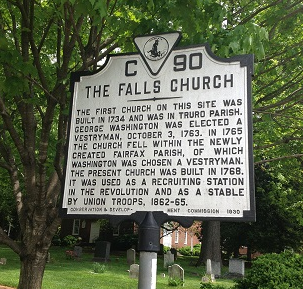 Like many of you, I've been praying for that outcome. And the "other side" - our brothers and sisters in Christ who are members of The Falls Church-CANA - have been of course praying for the exact opposite outcome.

To the degree that God listens to and answers prayers regarding what was essentially a secular legal dispute over land ownership, God does so not by filling orders or rubber-stamping desires, but by filling us and them - (ultimately I reject the whole mentality that even is an "us" and "them" - step back far enough, and you'll see there is only a "we") - with the Holy Spirit.  My hope is that our prayers, offered often enough, honestly enough, and persistently enough, helped everyone concerned let go of what we think we needed, even if it was still what we very much desired.

In other words, I wonder: to what degree did this long messy legal chapter change our desires? Re-arrange our priorities? Cleanse our hearts by the inspiration of God's Holy Spirit? Shift our worldview? Allow us to step out, like Abram, in faith, assured of God's blessing, using us all to be a blessing to others?