Francis was the son of a wealthy merchant, but encounters with the poor caused him to take Jesus/the Bible/the "authority of Scripture" literally and - much to the chagrin of his father - give up all his possessions and live a life of poverty, humility, and service to the poor. He was the founder of the Franciscan order, people who to this day dedicate themselves to following his teachings.

Ironically, St. Francis is best known to most American Episcopalians for one thing that wasn't all that central to his life - his love for animals and the resulting custom of an annual Blessing of the Animals -- and another thing that has nothing directly to do with him at all: the "Lord, make me an instrument of your peace" prayer that is printed in our Book of Common Prayer as attributed to him, but wasn't written much earlier than 1912, and not well known until World War II. 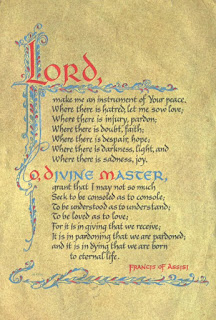 So there you have it, modern-day, North American/ European Christianity in a nutshell: take two things having little or nothing to do with the founder and create elaborate worship and prayer customs out of them, all the while ignoring what the founder cared most about! Lord, have mercy.

We - I - am as guilty as anyone of this dynamic. We - I - happily do the Blessing of the Animals service. 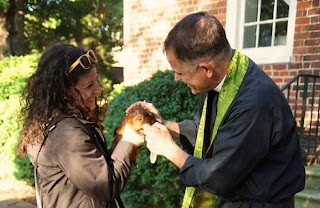 And we - I - enthusiastically perpetuate the "Prayer attributed to St. Francis" (and in fact on Sunday, we'll use it as our post-communion prayer). And we as a church -- and I as an individual Christian -- do not feel called to sell all our/my property, give the money to the poor, and live a life of poverty (again: Lord have mercy).

It seems, then, that the best we - I - can do is keep setting aside a day to honor the founder anyway: to keep the Feast Day of Francis annually and to keep the Sabbath Day weekly, as reminders to ourselves/myself to return to their principles. To keep returning to the difficult but life-and-soul-saving truths they articulated and modeled.

After all, we aren't called to BE Francis - we're called to be ourselves, inspired by him and all the Saints.

And we're not called to BE the Christ - we're called to be the Church, and individually members of it: beloved sinners, doing the best we can, where we are, and as who we are.