I’m beginning to wonder if “GC” stands for “General Convention” of the Episcopal Church, or “Gnats and Camels.”

You know the reference: Jesus noticed religious leaders who were meticulous about the smallest points of the law – to the point of tithing even one sprig of mint – but who ignored things that really matter.

Using a bit of hyperbolic humor, he says, “Blind guides, you strain out the gnat and swallow the camel.”

Gnats, as insects, were considered unclean. So the religious leaders of Jesus’ day carefully strained 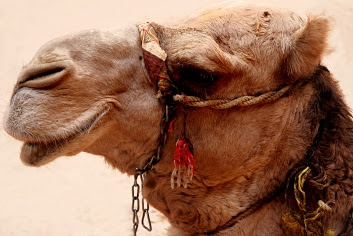 their wine to keep from accidentlely swallowing a gnat.

The picture he paints is that of religious leaders squinting at fine gauze to be sure they’ve captured pinhead-sized impurities, while camels – also unclean animals that were forbidden as food – have been swallowed whole.

It’s meant to be a comical portrayal.

But it’s a painfully accurate picture of the General Convention.

Every three years, General Convention spends days meticulously straining out gnats in countless resolutions while the camels of outdated and irrelevant Church Center departments and offices and the more than 75 committees, commissions, agencies and boards work their way through our bloated budget belly.

Just to give one example from the General Convention of 2009, our bishops – fine, articulate, passionate, sane and devout people when you meet them individually – spent some of their precious time together as brothers and sisters in Christ debating an amendment to an amendment to the fourth resolved clause to a substitute resolution.

To ask General Convention to request the Joint Standing Committee on Program, Budget and Finance to spend $300,000 to implement the substitute resolution, which called for the appointment of 14 people to develop a 10-year plan, updated annually, that would identify and track “the missional, financial, societal, cultural and other challenges and opportunities facing The Episcopal Church” and define “measurable indicators of success of the selected direction.”

In other words, we Episcopalians passed a resolution authorizing ourselves to spend an amount of money probably three times the size of the average Episcopal congregation’s annual budget…to find out what our problem is.

And report back on it.

The “challenges and opportunities” the Episcopal Church faces are not something 14 people need to spend three years and a third of a million dollars on: It’s something that any rector or senior warden of a growing and vibrant church can tell you in five minutes. (And it’s something that’s applicable at all levels of church governance, from vestry meetings to diocesan councils to the General Convention to Lambeth.)

And that is the degree to which we still see ourselves when we gather, as legislative bodies that happen to worship and have fellowship together, rather than as a worshipping and fellowship body that happens to legislate.

The first model – the church gathered as legislative bodies that happen to break bread and pray – is a Christendom-era understanding that – if it ever worked – has been chasing its own tail in this country since the 1950s.

The second model – the church gathered in order to engage in (I read this somewhere) “the apostles’ teaching and fellowship, the breaking of bread, and the prayers,” with an absolute minimal amount of time spent on essential housekeeping matters – is an Acts/pre- and non-Christendom model that is emerging again.

How to change from one model to another?

That’s where it gets interesting.

One approach is to try to change the system from within.

But as we’re learning, camels don’t digest quickly. Bishop Provenzano’s “William White is Dead”
proposal, and Bishop Sauls’ proposal to refocus the mission of the Episcopal Church on all things mission, are generating lots of resistance.

Those who author the vast majority of the resolutions at diocesan conventions and the General Convention – and who in turn serve on the committees, commissions, agencies and boards that those conventions authorize – pretty much like the system the way it is: As Bishop Provenzano writes, “There are too many people involved and invested in the power that comes from deep and cumbersome organization that has become increasingly bureaucratic.”

The very fact that Bishop Provenzano and Bishop Sauls are naming the source of our institutional indigestion is a hopeful sign.

But I don’t think that is how real or lasting change will take place in the Episcopal Church.

Rather, I’ve come to believe in the concept of “parallel growth change.”

The theory is this: Those interested in change should resist the temptation to battle the system or try to change the dominant, inherited culture – battles that only end up causing turf wars because people tend protect “the way things are.”

Rather, leaders who are in favor of change are encouraged to all but ignore “the system” and concentrate almost all their efforts on encouraging healthy franchises – those local retailers that are doing well in spite of “corporate” policy or procedures.

The analogy isn’t perfect – we’re not a corporation – but how that looks in the Episcopal Church is that people who are in favor of change should all but ignore “the system” and concentrate their efforts on encouraging healthy congregations – those congregations that are growing and mission-minded in spite of diocesan or “national” structures.

Where it gets really fascinating is this: “Parallel growth” assumes that one day all those healthy local franchises grow so much they eventually become the majority.

And then there is a revolution – an almost overnight toppling of those antiquated structures because the (now) majority simply won’t put up with it.

Rather than the slow, steady – and resisted-every-step-of-the-way – change favored by those who benefit from slow change, there is lots of parallel growth happening everywhere … and then there’s a palace coup.

My hope is to still be around – covering General Conventions and active in ministry – when that happens in the Episcopal Church.

It sure will be a lot more fun than watching deputies and bishops strain out gnats from their wine while munching down on camel burgers.