David and Goliath, and Your Goliath

June 18, 2015
This Sunday, I'm wrapping up a three-part sermon series based on the David story found in I Samuel. Two Sundays ago, we heard about Israel's insisting, over the prophet Samuel's warnings, that they should have their own King (King Saul). Last Sunday, we heard about the anointing of the young shepherd boy David as Israel's second King, despite the fact he was the youngest (and least likely) of many older brothers, and despite the fact that at the time of David's anointing, Saul was still King. We also looked at how we can put our faith in the God of Surprises.

Take a close look at this illustration: 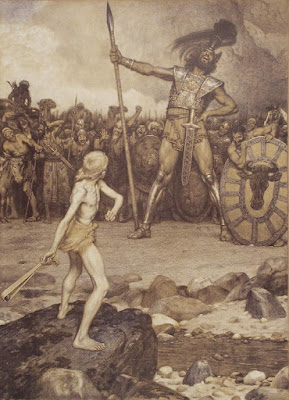 Imagine yourself as David. Smaller, un-armed. No military experience. You're facing a giant of a soldier, who IS experienced, and well-equipped.

Imagine whatever difficulty you are facing to be Goliath. Above you. Intimidating you. Mocking you.

You have every possible disadvantage.

Except one: you've been given a promise, by God, that has not come true yet. (David at this point is still a shepherd, not King). You know, by faith in God, that the same God who delivered you from lions and bears will deliver you now.

Here's my point: we are accustomed to thinking of David as the underdog -- in fact he's become the classic underdog.

But actually, David has a huge advantage. An insurmountable advantage. He has a promise from God, and he has confidence in that God.

And the amazing thing is, his advantage can be yours, as you face whatever you are facing.

God can help you, like David, overcome seemingly impossible odds.

November 22, 2020
A Church and a Christianity people and want to be part of Sermon preached November 22, 2020 Interim Dean John Ohmer All Souls Cathedral, Asheville, NC Matthew 25:31-46 Jesus said, “When the Son of Man comes in his glory, and all the angels with him, then he will sit on the throne of his glory. All the nations will be gathered before him, and he will separate people one from another as a shepherd separates the sheep from the goats, and he will put the sheep at his right hand and the goats at the left. Then the king will say to those at his right hand, ‘Come, you that are blessed by my Father, inherit the kingdom prepared for you from the foundation of the world; for I was hungry and you gave me food, I was thirsty and you gave me something to drink, I was a stranger and you welcomed me, I was naked and you gave me clothing, I was sick and you took care of me, I was in prison and you visited me.’ Then the righteous will answer him, ‘Lord, when was it that we saw you hungry and gave you
Post a Comment
Read more