February 12, 2018
So for Lent, I was thinking of doing the typical fasts: fast from Facebook and take up reading, fast from petty vices like overindulging in sweets and alcohol and take on moderation, yada yada yada.

But I'm re-thinking that.

Now one of the things I'm thinking about fasting from during Lent is discouragement. That means cutting back on what is so often the source of discouragement, which is a tendency to gorge on, or dwell on, bad news.

That would mean taking on encouragement: to make visible -- even on Facebook -- the good.

Because the problem is -- to paraphrase the community organizer Rich Harwood -- a lot of times we see "good news stories" as being quaint -- they are tossed in at the end of the news as an inspiring story, or put in the style section. But stories of good things happening -- people coming together to do things, is not a touchy-feely, feel-good story, but something affecting real change.

So for starters: I'm inspired by the leadership example of Christopher Fay, who was honored by the City of Falls Church with their 2017 Sprague Award for Affordable Housing Advocacy. 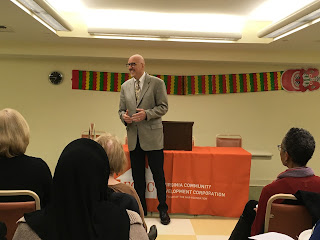 In receiving the award, Christopher spoke for, at most, five minutes, and in that five minutes not only said almost nothing about himself, but instead recognized and sincerely thanked, by name, so many other people that I lost count at 15. But three of those people were women who, with their young children, entered Homestretch homeless and are now, five years later, not only homeless, but home-owners.

"Good news" stories like these may not make the morning paper or into our news feeds, but they are every bit as "hard news" and real as the bad or discouraging news stories.

People like Chris Fay may not grab headlines or be the subject of our conversations in the mornings, but they are the true leaders -- and the true hope -- of our communities, and of our nation.
Location: Winter Hill Apartments

November 22, 2020
A Church and a Christianity people and want to be part of Sermon preached November 22, 2020 Interim Dean John Ohmer All Souls Cathedral, Asheville, NC Matthew 25:31-46 Jesus said, “When the Son of Man comes in his glory, and all the angels with him, then he will sit on the throne of his glory. All the nations will be gathered before him, and he will separate people one from another as a shepherd separates the sheep from the goats, and he will put the sheep at his right hand and the goats at the left. Then the king will say to those at his right hand, ‘Come, you that are blessed by my Father, inherit the kingdom prepared for you from the foundation of the world; for I was hungry and you gave me food, I was thirsty and you gave me something to drink, I was a stranger and you welcomed me, I was naked and you gave me clothing, I was sick and you took care of me, I was in prison and you visited me.’ Then the righteous will answer him, ‘Lord, when was it that we saw you hungry and gave you
Post a Comment
Read more