August 13, 2019
Note: because the famous quote from the Statute of Liberty is in the news, I wanted to re-post a portion of a sermon I preached, partly on that topic, in September of 2015.

Most people are familiar with a couple lines of the poem that is written on a tablet within the pedestal on the Statute of Liberty in New York: “Give me your tired, your poor, your huddled masses yearning to breathe free.”

The poem is called “The New Colossus” by the Jewish poet Emma Lazarus. Here’s the whole poem:

Not like the brazen giant of Greek fame,
with conquering limbs astride from land to land;
Here at our sea-washed, sunset gates shall stand
A mighty woman with a torch,
whose flame is the imprisoned lightening,
and her name
Mother of Exiles.

From her beacon-hand
Glows world-wide welcome; her mild eyes command
The air-bridged harbor that twin cities frame.
“Keep ancient lands, your storied pomp!” cries she with silent lips.
“Give me your tired, your poor,
Your huddled masses yearning to breathe free,
The wretched refuse of your teeming shore.
Send these, the homeless, tempest-tossed to me,
I lift my lamp beside the golden door!

What is the sentiment of the Statute of Liberty? 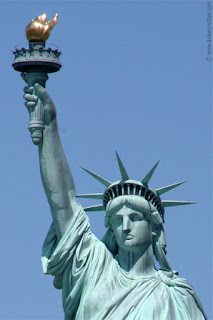 “Give me your tired, your exhausted.

Give me your poor…give me those who’ve never heard, and don’t care, about the stock market because the only fluctuation they care about is the fluctuation of their empty stomachs.

Keep, ancient land, all your nicely-dressed people who might come over in Business Class.

Give me those huddled masses in the back of the U-Haul.

Give me the wretched refuse that is packed onto rafts.

Send them to me: the homeless, the tempest-tossed, the frightened. Here.

Send them here, to America.

That sentiment – that philosophy – of preferring the poor, the lost, the least, has deep roots not only in the human heart, but in the public policy of this country,

And that sentiment in our hearts and in our public policy finds of course its roots in the Bible. Take, for example, the lessons assigned for today:

“If a person with gold rings and in fine clothes come into your assembly, and if a poor person in dirty clothes also comes in, and you take notice of the one wearing the fine clothes and say, ‘have a seat here, please,’ while to the poor you say, ‘stand there,’ or ‘sit at my feet,’ have you not made distinctions among yourselves and become judges with evil thoughts?”

In today’s Gospel, someone approaches Jesus and begs him to heal her child. In Jesus’ day and age, this person has everything going against her:
According to the rules of society at the time in that place, it was shocking and even rude for the two of them to be engaged in conversation.

So when she comes to Jesus and asks that her daughter be healed, Jesus tells her that he has come primarily to serve the people of Israel.

His own people come first. His own nation comes first.

And (therefore) he tells her, it isn’t right to give what is rightfully theirs to others.

Except he says this in a way that is shocking and even insulting: he says “let the children be fed first; it’s not right, it’s not fair, to take the children’s food and throw it to the dogs.”

When she turns this insult around and says, “Sir, even the dogs under the table eat the children’s crumbs,” Jesus says to her, [ah…woman…!...“for saying that, you may go”—and pronounces her daughter healed.

In case we didn’t get the point in the first part of this passage, the next thing that happens is that a deaf man with a speech impediment is brought to Jesus.

Remember that being deaf in that day and time carried with it all kinds of beliefs that we would now call superstitions or prejudices: namely, they believed that physical impairments were the consequences of sin, or proof that you or one of your ancestors did something wrong to deserve it.

So the blind and deaf or deformed back then were also at the bottom of the social scale, little to no status.

So Jesus takes him aside, puts his fingers in his ears, spits and touches his tongue, looks up to heaven and says “Ephphatha” which means, “Be Opened.”

When Jesus restores a blind or deaf or maimed person to physical health, he’s also opening a door that has been closed: the door to society, the door to hope.

*When Jesus heals a woman of Syro-Phoenician origin -- someone from Syria –
Someone from Syria yearning for her daughter to breathe free
he opens categories of ethnicity and race and class;
he opens minds, he opens the border between people,
and between humanity and God.*

Politicians and political races cease to be silly, cease to be entertaining, when they slide into demagoguery, which is both anti-American and anti-Judeo-Christian.

Throughout American history, this country has been offered different choices about the posture we will take to refugees, the huddled masses yearning to breathe free.

Throughout Christian history, churches have been offered different choices about the posture we will take to the poor -- which is always a choice between mercy and judgment.

The best posture of this country is the posture that is rooted in the best of our faith: